When we first met Bing, she was the mother of 10 children and was regularly beaten by her alcoholic husband. Bing’s family was among the poorest in her neighbourhood.

Because of the money and time her husband spent on alcohol, their family’s savings were constantly drained. He also kept Bing pregnant, which meant that she couldn’t provide for her family’s needs.

That’s when we met Bing.

Thankfully, we were able to give her a job sewing bags for Work of Your Hand—and that job changed everything.

Because Bing was bringing money home for her family, her husband stopped beating her. He began to treat her with the respect she deserved.

Gradually, things improved for Bing’s family. They were able to pay their bills and put food on the table; they no longer sent their children to the neighbourhood feeding program, and they could afford their children’s school tuition.

Eventually, the couple even began to save and in 2012, they moved into a much nicer home.

Today, Bing has put on weight and become much more cheerful than when we first met. She is also a leader in her community, and she helps others who are struggling just like she did not long ago.

We are proud to partner with this resilient woman. Way to go Bing!

Thank you for partnering with impoverished people like Bing. You’ve joined a movement of people that are changing lives, one purchase at a time. 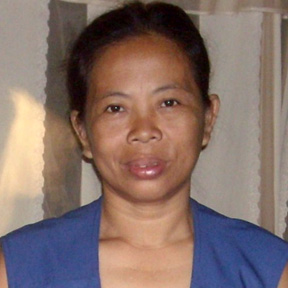